If you click 'Accept', we’ll accept this as your consent and that you are happy to receive tracking cookies. If you do not wish this browser session to be tracked via cookies please ensure you click the 'Deny' button below, You can reset this at any point by clicking the "Reset non-essential cookies" option. You can change these preferences at any time by visiting our Cookie policy.

Who are the investors powering a post-referendum FTSE revival?

Insights - What we think

Our investor relations specialists, Orient Capital, are in a unique position to understand share ownership data.

Our investor relations specialists, Orient Capital, are in a unique position to understand share ownership data.

Their recent research, published 1 August 2020, shows that 35.9 per cent of shares in UK companies across FTSE 100 and FTSE 250 are owned by funds and trusts operated by North American companies such as Vanguard and BlackRock. These two make up over 10 per cent of the index alone.

North American asset managers now own over a third (36 per cent) of the UK’s biggest companies, after a significant increase of investment into the FTSE 350 following the EU referendum.

This is equivalent to the share owned by European institutions (11 per cent), while those based in Asia and the Middle East own 2.3 per cent and 1.2 per cent respectively, as of May 2020. UK institutions own 22.1 per cent. 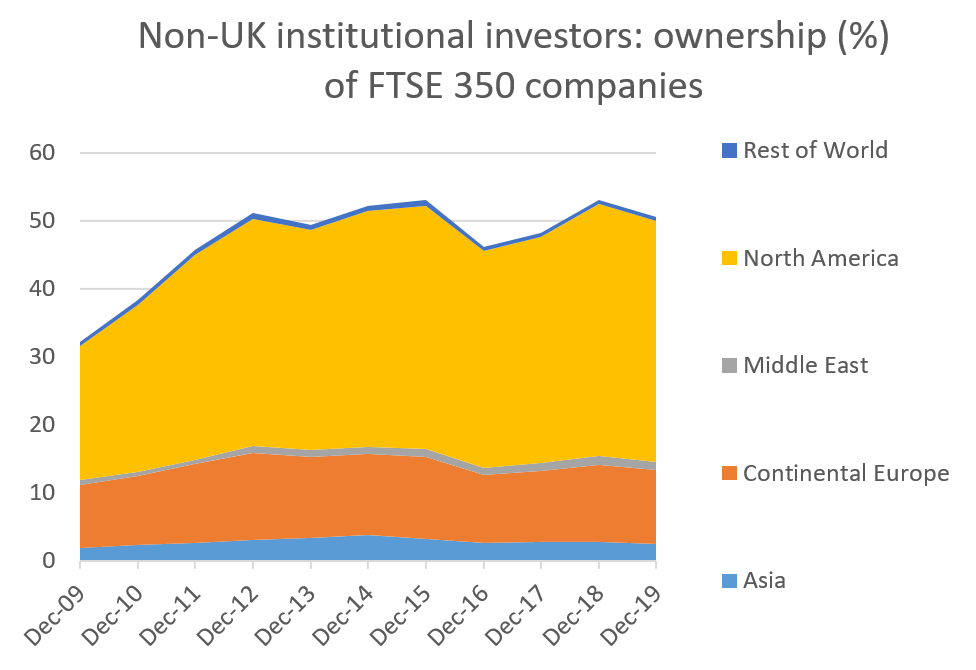 In total, just over half (51 per cent) of all shares in UK FTSE 350 companies are owned by investment managers working for companies based abroad. This matches recent history – with a higher share in three of the last ten years.

However, although many foreign investment managers have shunned UK companies since the EU referendum, those in North America almost doubled their stakes in the market – from 19.8 per cent to 35.9 per cent at the end of May 2020.

But what has caused this increase?

The Orient Capital data shows that the popularity of passive funds that give investors access to a slice of the whole market at low cost has soared at the same time. 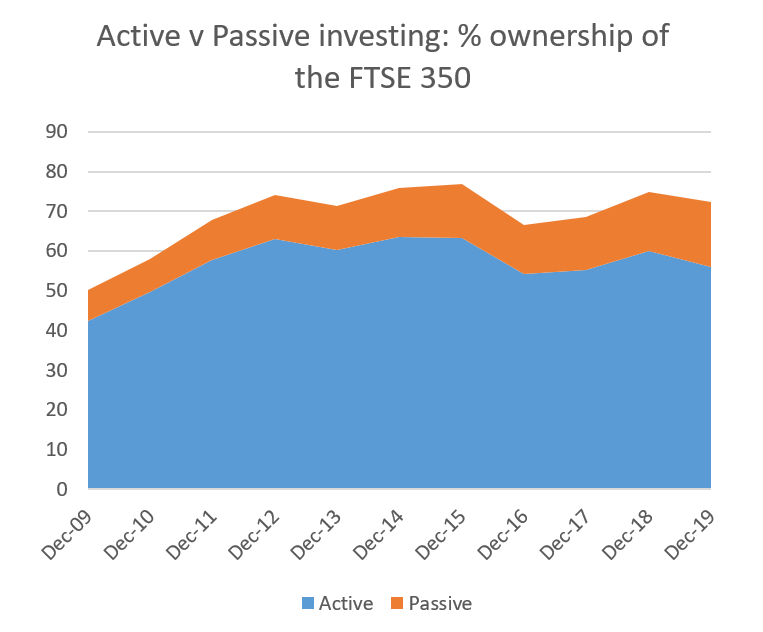 In the last decade, these types of institutions doubled their share of ownership from 8 per cent to 16 per cent, and the value of their holdings in the FTSE 350 jumped 209 per cent. The UK market is still dominated by active managers who own an outright majority (55.9 per cent) of all FTSE 350 shares, though times are changing rapidly.

‘In investment terms, the tectonic plates are shifting beneath us and ownership of the UK market is being pulled across the Atlantic.

‘Our data shows significant change in ownership of the UK’s biggest listed companies predominantly due to the growth of passive investing driven by the Big Three North American asset management houses; BlackRock, Vanguard and State Street, who together manage more than $17trn in assets. This should be a key consideration for investor targeting. Vanguard’s growth in the last decade has been particularly striking, with its investment in the UK stock market growing nine-fold since 2010 making it one of the largest single asset managers invested in the UK.

‘It’s no coincidence that passive funds have doubled their holdings in the FTSE 100 and 250 as well; clearly a few North American fund houses have unleashed a demand for low-cost, long-term investment here in the last decade. This mirrors ownership trends seen in North America and, with the rise in exchange-traded funds (ETFs), the growth of passive funds is unlikely to abate any time soon.

‘However, active institutional investors still dominate the market and with all this money from passives now algorithmically rushing into the biggest stocks through market-weighted indices, some investors may wish to stick with active portfolio managers who continue to make potentially more subjective and nuanced investment decisions.’